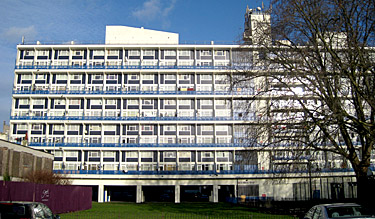 Symington House, the JMB’s largest single block, is to have both its lift cars replaced starting in March 2010 as the final part of the refurbishment of the building.

The new lifts will be fitted with CCTV, connected in to the new system covering the whole of the building and the surrounding area.

The lifts will also have an electronic monitoring system, so the JMB and the lift engineers are automatically notified if there are problems with the lift – speeding up the time it will take to put any problems right.

The lifts in Symington House have had the most problems of any of the JMB buildings and have been repeatedly breaking down, causing problems for the residents.

After Southwark Council removed the Symington lifts from the Council’s lift replacement programme last year (the Council, as owner of the building, is responsible for paying for major works), the JMB Directors agreed to pay for the £43,000 from the JMB’s own funds, recognising the problems that the lifts were causing. As the lift motors and lifting gear have been renewed within the last 10 years, they will not need replacing.

The JMB started the replacement process in May 2009 – once the other major refurbishment work on Symington House had been completed. The formal two-stage legal process of consulting with people who have bought flats in Symington House (under Section 20 of the Landlord and Tenant Act 1985) and the tendering process to find the best company to do the work mean that the work has not been able to start until Spring 2010.

During this time the JMB has also repaired the problem of rain water getting into the lift shafts and in to the lifts.

The replacement work will start in March 2010. The lifts will be replaced one at a time, with each lift taking two weeks to rebuild, so there should always be one working lift.

There will be some noise and disruption while the replacement work take place, particularly during the first couple of days on each lift where the old lift car is removed. We will try and keep this to the minimum possible.

We expect both new lifts to be fully working the end of April 2010.

If you have any questions or concerns about this work contact the JMB office.